The programme of the TSD conference is traditionally enriched by various excursions to interesting places and trips around local sights. This time the organizing committee has arranged an excursion to the world-famous Pilsner Urquell brewery, and a whole-day conference trip to the medieval town of Cheb (Eger), the Soos natural preserve with hundreds of mofette (mud volcanoes), and the town of Skalná.

TOUR OF THE PILSNER URQUELL BREWERY

Tuesday, September 3, 16:30
The detailed description will be added later.

We will take the conference bus and visit a beautiful sight in the north-western part of the West Bohemia region – the Soos national nature preserve. Then we will have a lunch in the Vildštejn castle in Skalná. In the afternoon, a city walk from the Cheb castle through George of Podebrady square is planned.

The expected schedule of the trip is as follows (can be refined, eventually):

NNP Soos near Františkovy Lázně is one of the most important nature preserves in the country. Soos is a unique relic of a salt lake which over the centuries turned into a vast moorland. In unusual habitats, of which there are many, there are plenty of protected fauna and wetland or salt-loving plants.

Typical for NNP Soos are bubbling mud volcanoes called mofette and numerous mineral springs. Mofetta is a name applied to a volcanic discharge consisting chiefly of carbon dioxide often associated with other vapours representing the final phase of volcanic activity.

Educational, 1.2 km (0.75 mi) long trail leads on wooden walkways on the bottom of a dried salt lake where the lake from the shells of diatoms have created a European rarity – called diatomite shield. There is also a geopark, Museum of Nature, and paleontological exhibition. Vildštejn (German: Wildstein) is a Romanesque castle – one of the oldest and best preserved stone castles in the Czech Republic. Located on a rocky cliff above the creek Sázek in Skalná. It was built in the years 1166 – 1225. It is protected as a cultural monument of the Czech Republic. 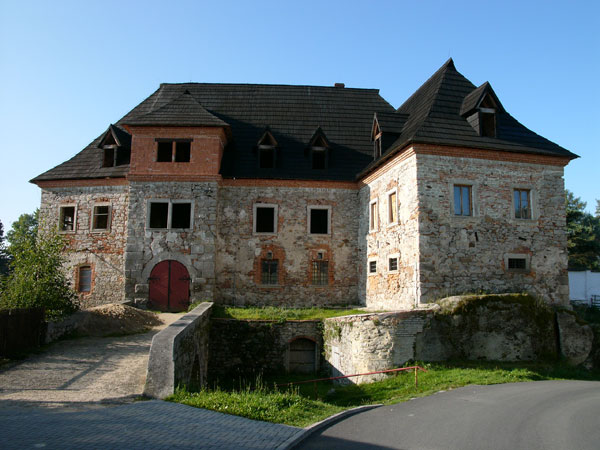 The castle is built in the Romanesque style with elements of Hohenstaufen castle architecture as a water castle – it is separated from the surroundings by an artificial lake. Later it was partly rebuilt in Gothic and Renaissance style, Romanesque elements, however, are retained.

The history of the Cheb castle (German: Eger) dates back to the early 12th century. The foundation of the castle and its development are closely tied to the Stauf family, from which a number of Roman emperors and German kings were descended. The Stauf family rebuilt the castle into an imperial palatinate at the end of the 12th century, i.e. the only representative of this type of castle architecture on the territory of the Czech Republic.

Only the torso of the ostentatious palace, the robust Black Tower and especially the unique two-storey romanesque and gothic chapel of St. Martin, St. Erhard and Ursula have been preserved from the once extensive castle stronghold. On the castle grounds you may also visit the casemates with an exposition dedicated to the history of stove building in the area of Cheb, the remains of the outbuilding known as the Kuchelhaus, or the Mill Tower. In the court you may see tombstones from the original Slavic burial grounds located on the site of the present-day chapel, the castle well, or the castle cannons.

The first written record mentioning Cheb (German: Eger) dates back to 1061 and it is concurrently the oldest record documenting the progress of medieval colonization of Egerland (German name for the area of Cheb).

In 1167, Cheb was acquired by Emperor Friedrich Barbarossa who was aware of how significant its border position was for the objectives of his imperial policy. Colonization of Egerland was completed during the 100-year rule of the Stauf family and in addition to numerous castles and fortified settlements; there were almost 300 colonization villages in the district. In a deed dating to 1203, Cheb is first denoted as a town (civitas). In 1266, Cheb was occupied by the army of Přemysl Otakar II (also denoted as Ottokar II of Bohemia), King of Bohemia, who took advantage of his position of the administrator of imperial estates and attached Egerland to his lands.

On the Market Place dating from the 13th century there is a group of houses originating from the late-Gothic period known as Špalíček. This distinctive feature of the market place is a bizarre complex of eleven houses. The outline of the two blocks can still be seen on the oldest existing records of 1472.

If you plan to attend the conference trip, please, check in on the "My Preferences" page (after logging in to your personal account).

The main square of the town of Cheb. Photo © cestovani.kr-karlovarsky.cz, 2013.